As the “Allende Letters” and their connection to the so-called “Philadelphia Experiment” continues to exert a fascination among conspiracy theorists, ufologists and those interested in high strangeness (both pro and con), one part of the mystery has been solved. This concerns the “unobtainable” original VARO Edition of author M. K. Jessup’s 1955 book entitled The Case for the UFO, which was the basis for the PX legend, and whose bizarre hand-written additions are still being analyzed and debated 67 years after they first appeared in a dog-eared copy mailed to the Office of Naval Research. My personal quest for an original copy of what is regarded to be the rarest UFO publication of all began some 35 years ago. After diligently searching for what admittedly became an obsession, just when I was beginning to think the original was a mere chimera, it seems my doggedness paid off as I finally managed to obtain a copy. Before continuing with how I tracked it down (cue pulse-stirring rhythm), for those not familiar with the work in question, allow me to give a brief overview: 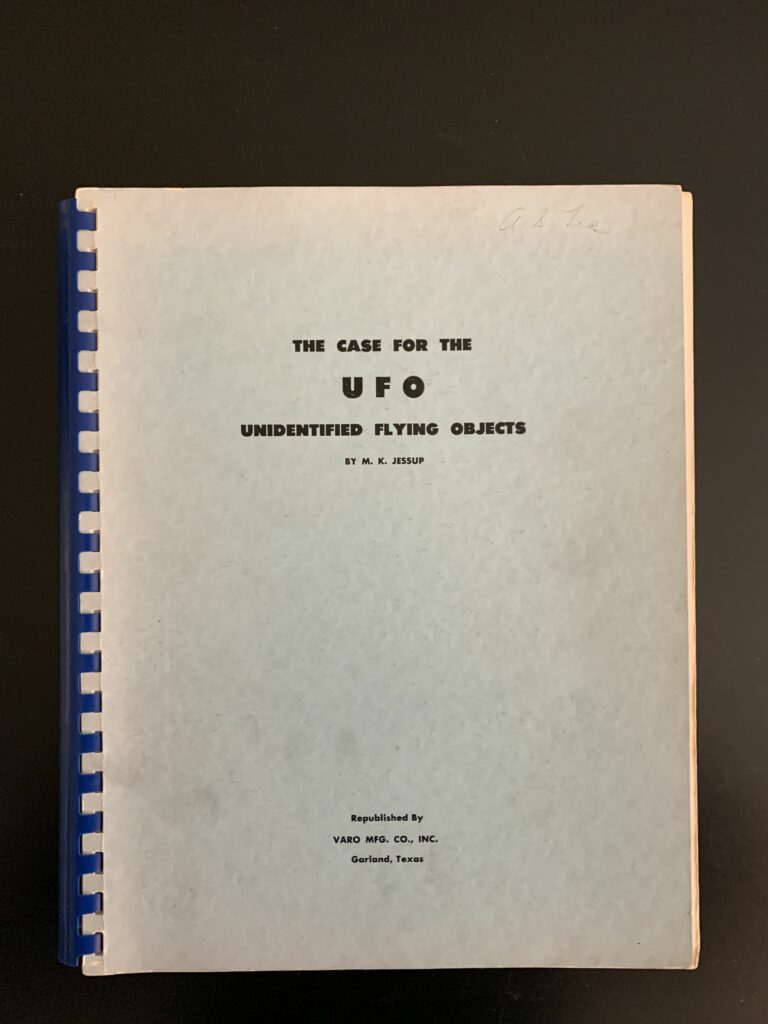 Shortly after a mass-market issue of Jessup’s seminal work dealing with paleocontact (ancient astronauts) was published, the ONR received a manila envelope that was addressed to Admiral N. Furth, and scrawled with the words, “HAPPY EASTER.” Inside was a battered copy of the Bantum paperback that was heavily annotated in three colors of ink to represent each of the supposed annotators, Mr. A, Mr. B and Jemi. The peculiar marginal notations concerned esoteric technologies that included oblique references to Einsteinian physics along with a mind-boggling account of U.S. Navy experiments with invisibility force fields and the teleportation of a destroyer-class ship (which had devastating affects on the crew). Additionally (pun intended), the notations contained all the answers to the questions posed in Jessup’s book. Those responsible for the comments, whoever they were, knew things that nobody should know. To some, the scribbled discussions appeared as the delusional ramblings of cranks, while to others the revelations had a decidedly alien tone about them, that some ufologists interpreted as a leak of sensitive material by a government insider (if not the jottings of actual alien entities!)

As it turned out, the idiosyncratic phraseology (which at times is reminiscent of the infamous Men in Black), misspellings, careless punctuation and unnecessary capitulation matched the grammatical style of a series of equally perplexing letters that had previously been sent to Jessup by an enigmatic drifter named Carlos Miguel Allende (A.K.A. Carl Meredith Allen). For reasons unknown, with permission from the publisher, certain high-ranking personnel at the ONR enlisted the VARO Manufacturing Company (a government contractor that engaged in highly classified military projects) to faithfully reproduce the material… baffling footnotes and all. 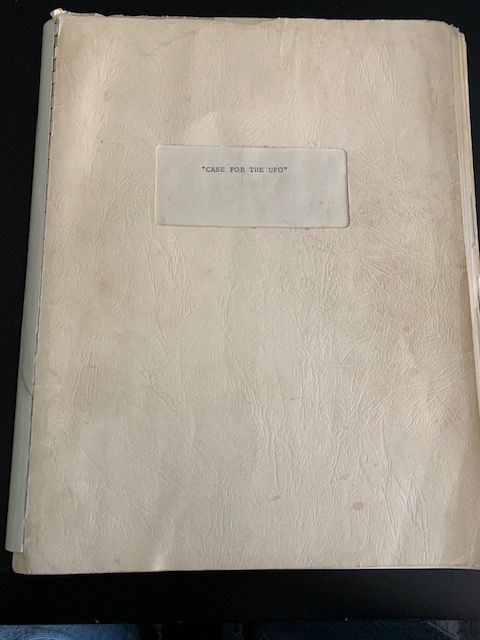 The secretary of the firm’s president – a Miss Michael Ann Dunn – was given the task of laboriously re-typing and mimeographing the entire oddity by running off-set stencils through the office duplicator to distinguish the marked additions in a separate color of ink (red). Though the number of copies made varies with each telling, it could be as low as a dozen, and as high as 100 (though most researchers place it at 25). 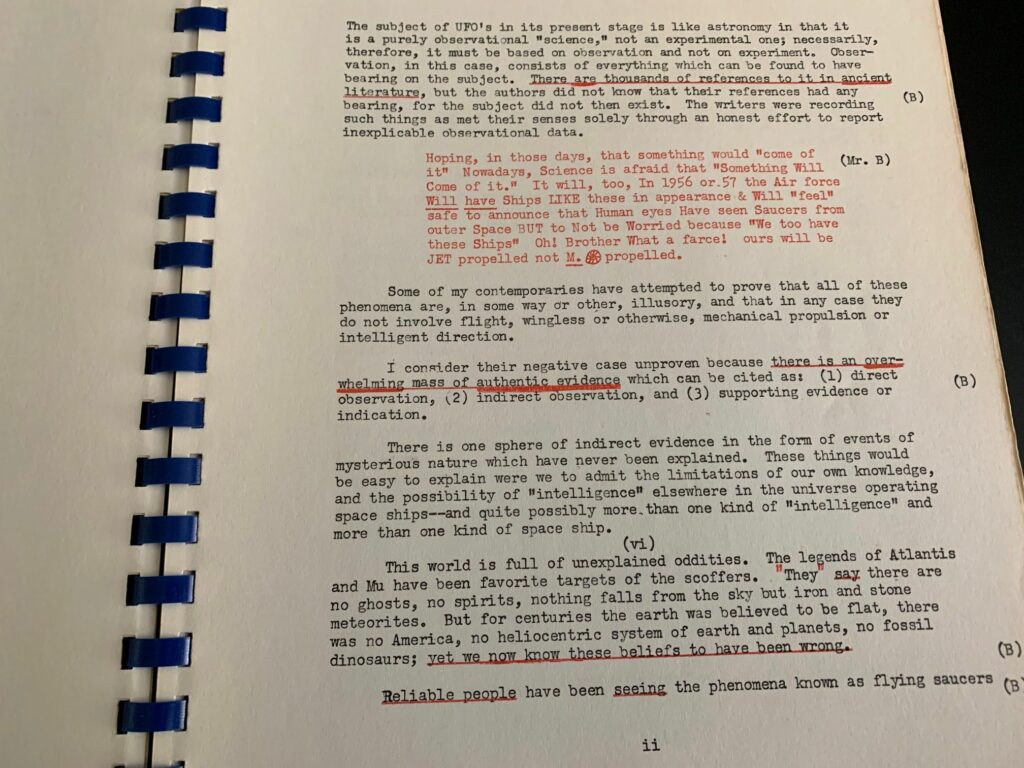 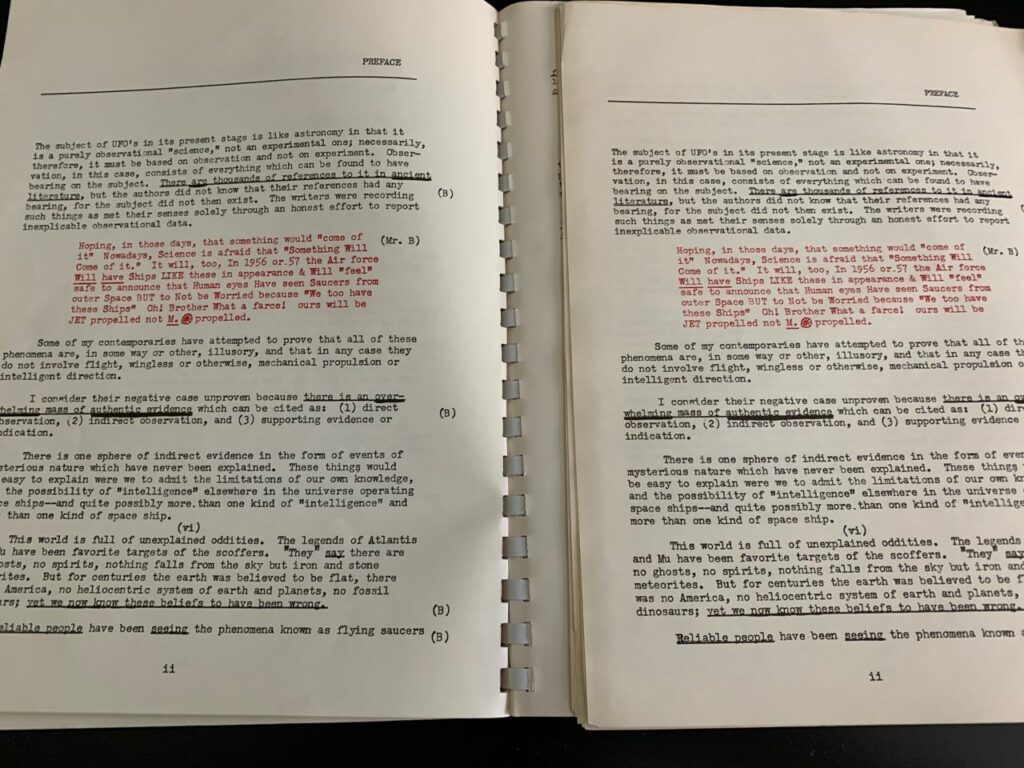 However many (or few) there were, until I obtained my copy, I had never seen an original copy for sale (though occasionally a Saucerian Press reprint facsimile turned up along with cheaply produced print on demand copies that now flood internet bookstores) or, for that matter, not even a single photo of a copy in the hands of another. To say it was elusive doesn’t put in words how difficult it was (for me, at least) to verify its very existence as tangible evidence of the book’s reproduction by a military contractor as opposed to the working of a cunning ufological trickster.

Having come up empty in used bookshops back in the late 1980s, it was at a crowded expo in Los Angeles in the early 90s (before the e-landscape took shape) that I chanced upon a rare book dealer from Salt Lake City who mentioned having recently purchased a large collection of vintage “flying saucer books.” When I asked him if he was familiar with the Varo Edition, his reply was that he wasn’t, but after I described its peculiarities it seemed to ring a bell. Of all of the hundreds of books in the collection, there was one that the lady (whose husband had recently died) had initially been reluctant to part with. When she agreed to include it with the others, he (the buyer) realized it was merely a Xerox copy of some old UFO book that had been spiral bound with light brown card stock covers (not the pale blue covers that were used for the Varo Edition). Although this was disappointing at first (as was his telling me that he left the thing back at his store in Utah), when he mentioned something about a Mr. A and Mr. B, I knew that this was my chance to at least have some semblance of the much sought after reproduction. Without seeing it, I offered to pay $100.00, which he agreed without any hesitation, and instructed him to ship it to me at an address on Oak Island (not the one in Nova Scotia, but on the Outer Banks of North Carolina where I would be on a family vacation in a few days). When I received it, it was just he described – a Xerox copy with only black typeface for the notations and underscoring. Along with the “Allende Letters” in an appendix, it contained an introduction by someone at the ONR who “expressed [a] direct interest in some of the material therein.” It wasn’t exactly what I was hoping for (as a collector), but at least I could finally read the notations that were said to be bizarre in the extreme.

If I couldn’t have an original, maybe one of the Saucerian facsimile reprints that were produced by Gray Barker in 1973 would eventually turn up. As to how these came about, there is an interesting story. It seems that back in the late 1950s Barker was also having trouble tracking down a copy of the Varo Edition.  So much so, in fact, that he, too, had doubts about its existence. The few persistent researchers that obtained a copy (or microfilm of a copy) of the “fantastic key to the flying saucer mystery” claimed that they vanished from their homes and disappeared in the mail. Men in black suits with stilted speech that was as awkward as the writing style of the annotators paid them visits and questioned them about some of the tantalizing passages in the book. 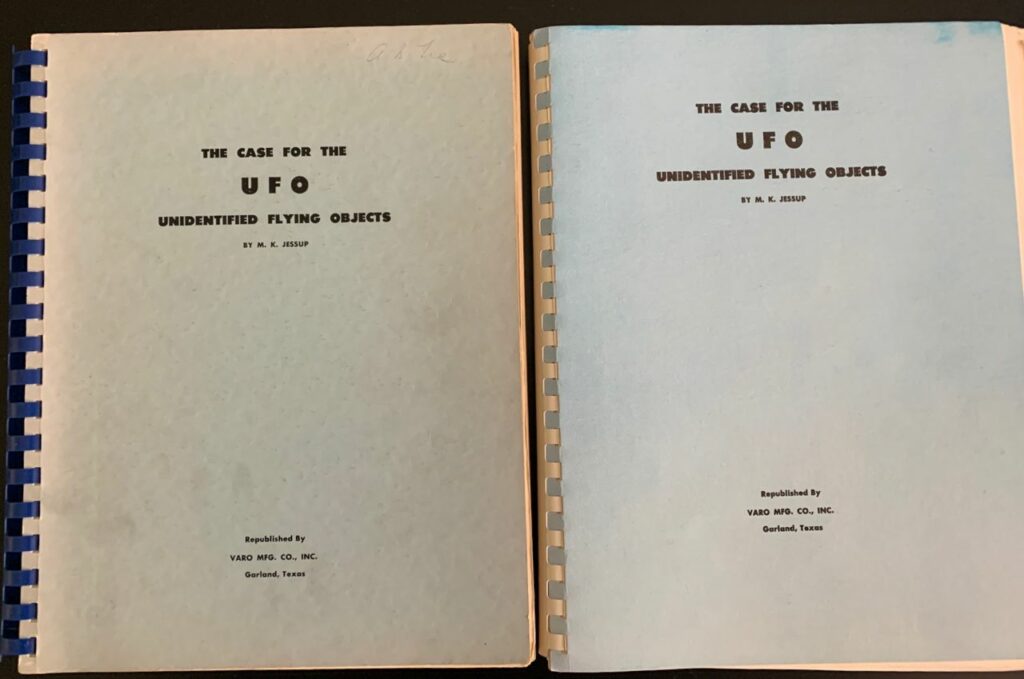 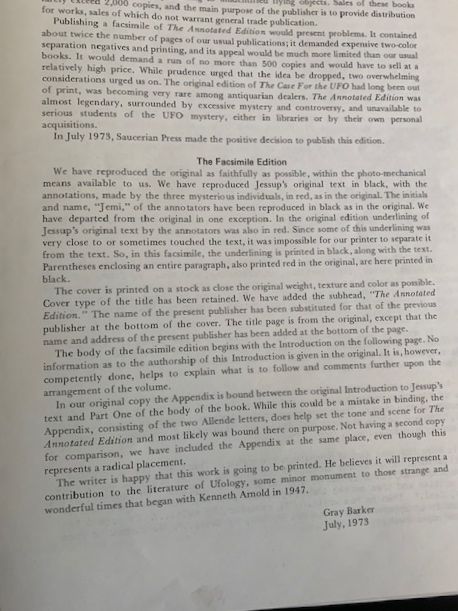 When he finally came into possession of a copy, Barker decided to make the material available to the public by printing a facsimile that was as close to the original as possible. While explaining the painstaking process involved in doing do, he told his mail order subscribers that the cost involved of including the marginal notations in red ink caused him to charge $32.50 per copy – a hefty price in the early 1970s. Being a luxury that few UFO buffs could afford, not many copies were printed and, hence, today it is quite rare.

If memory serves me correct it was in the mid 1990s that an online bookseller listed a Saucerian Press copy for $500.00. When I told my friend (Danny Carey) the news, he said something to the effect that the price was too high. Nevertheless, when I tried to buy it a short time later, I was told that it had been sold. A few days later I saw a copy lying on Danny’s coffee table. When I asked him about it, with a wry smile he called it “a piece of shit” and said that I could have it.

For the next two decades that was as good as it got. I continued to search online nearly every day, hoping to at least glimpse an original version. My frustration got the better of me when I expressed doubts about it in an article about the late Gray Barker in Darklore Volume X (2019). The whole thing was an elaborate hoax perpetrated by him, I speculated, just as the ingenious prankster had done with other purported UFO documents in the past.  It seemed quite fortuitous that he chanced upon a copy that an anonymous researcher was selling after giving up the flying saucer business. In Barker’s own words, “the impossible happened.” But, if it really was a deceptive tactic on Barker’s part, how could I explain that Xerox copy that I had (that didn’t include the Saucerian preface)?

In March of 2022 a copy of the Varo Edition appeared for sale on eBay. Thinking it was another Saucerian version (by this time I had acquired several copies), I was about to scroll down to other listings when something about its blue spiral binding caught my attention. The plastic rings were slightly duller than those used for the other Saucerian publications I owned. The print on the pale blue card cover also seemed a bit sharper. Though barely perceptible, upon closer examination, I could make out spaces on the one in the photos where the ink had run together on my copies. Fortunately, the seller also provided a couple of photos that showed the marginal notations printed in red. But, here too, something seemed different. I soon realized it was the underscoring which was also red. I raced to my bookshelf and pulled all three of my Saucerian copies. In all of them the underlined sentences were black. I recalled Barker’s statement about reproducing his copies “as faithfully as possible within the photo-mechanical means available” to the original. With this in mind, I decided to take a chance. Priced at $200.00, even if it was just an unusual Saucerian reprint, it was still worth the asking price.

When it arrived, the first thing I did was to check to see if it contained Barker’s preface from July in 1973. It didn’t! As exciting as that was, I could also see that pages were laid out on different sides and that all of the underscoring was done in bright red ink. The paper used was also different from my Saucerian copies, as was the texture of the old blue card stock. When I realized that the faint initials on the cover were those of the Chairman of the Board of the Varo Manufacturing Company in the 1950s, I knew that my quest had finally ended. 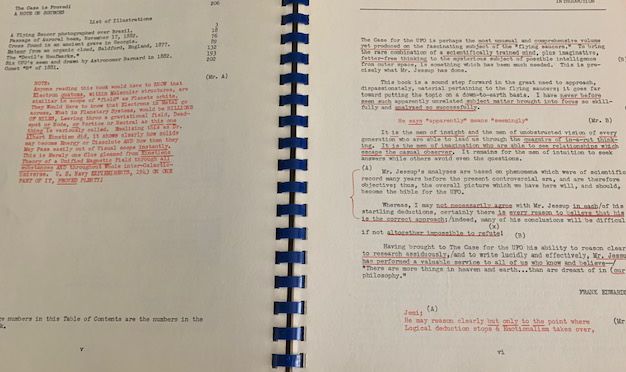 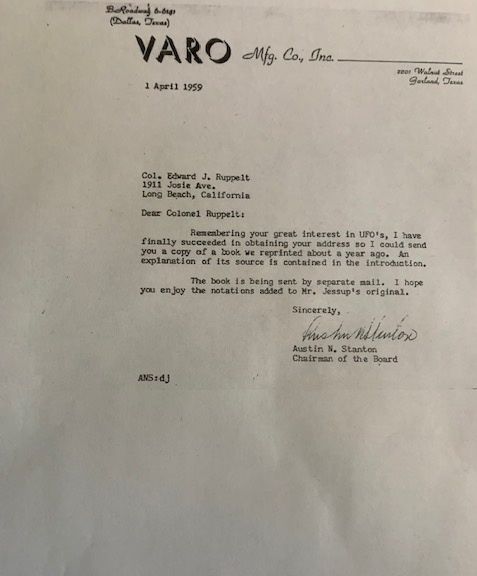