The focal point in the design “SHAMANITA” is not meant to marginalize the historical view regarding the origin of traditional holiday motifs but, rather, to offer an alternative interpretation to conventional concepts – in particular that of Santa, his elves and flying reindeer.  Those who have read the essay (entitled Shamanita) will be prepared for any questions when wearing (or bestowing as a gift) the shirt… and blow the minds of friends and relatives with a psychedelic version of the holiday season… and origin of the true WONDERLAND. 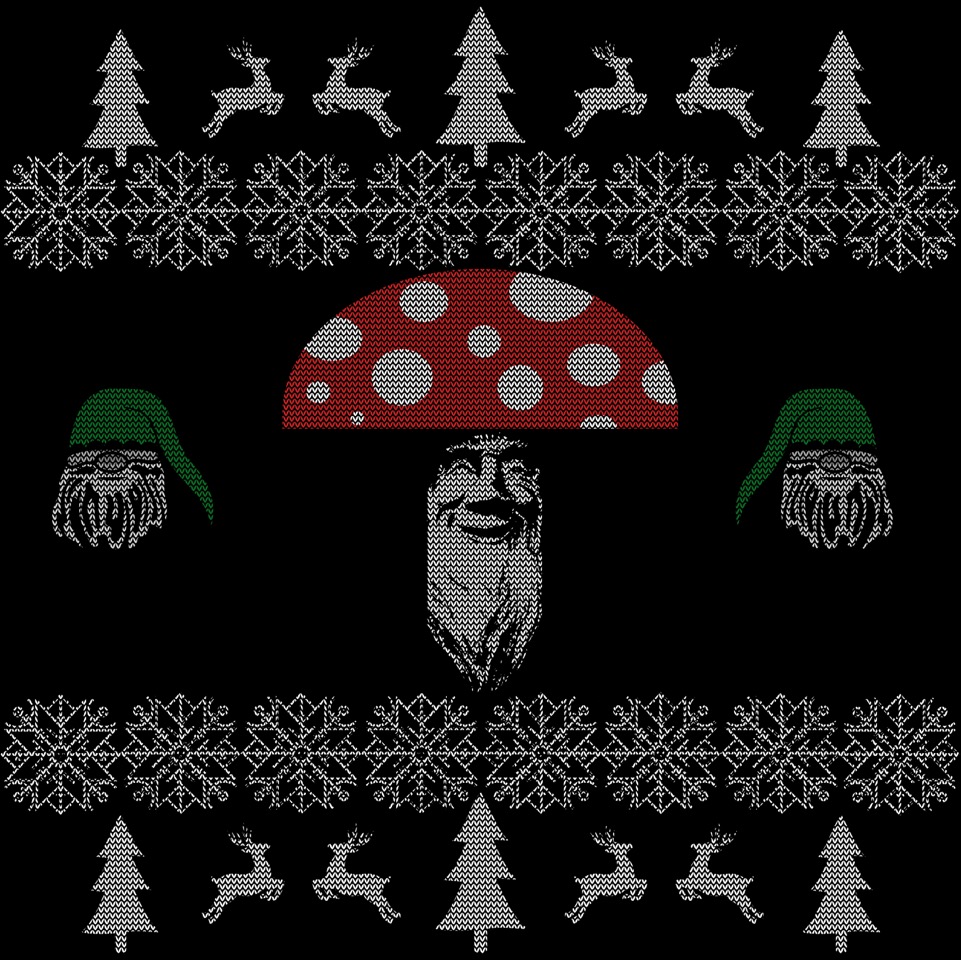 The inspiration for the “SHAMANITA” graphics goes back to my December 2000 e.v. Tool Newsletter, in which I suggested a connection between ancient shamanic ritual ceremonies involving the use of the hallucinogenic fly-agaric mushroom, genus Amanita muscaria, and traditional Christmas motifs, with the emphasis being on Santa and his helpers. Nearly 20 years later the Internet contains numerous articles about the Santa-Amanita analogy that are essentially the same as my earlier work, although some of the researchers have added a few new elements. Towards the end of my original article, for the sake of clarity, I repeated the list of connections in the shamanic origins of Santa Claus and holiday symbols, adding that it included everything but Santa’s Ho! Ho! Ho!, and that I was working on that! Soon after, I had the idea that this involved the shaman’s deep-throated chant – that which helped induce the necessary altered states of consciousness for his otherworldly journey. However, I later realized, unless it was just an incredible coincidence, Santa’s Ho Ho Ho chuckle hinted at the complex pharmacology of the Amanita muscaria mushroom, namely the chemical structure of ibotenic acid and muscimol.

For those of you who are not familiar with the “Santa Code”, here are some of the more significant connections between ancient shamanistic rituals and modern Christmas iconography:

First of all there is the obvious association between the mushroom’s distinctive colors and that of Santa’s attire. Amanita muscaria has a red canopy with white flecks, and Santa has a beard of white and coat of red. When I first pointed this out in the 2000 newsletter, some readers were quick to respond with the Santa Claus-Coco-Cola advertisements of the holiday season, stating that Santa’s original robe was green, and later changed to the corporate colors of the soft drink company. However, despite the jolly one’s Coke guzzling image, the evidence clearly shows that long before the existence of the Coca-Cola brand, Santa was often depicted in his familiar red suit (for example, in the morphing artwork of caricaturist Thomas Nast.)

Ethno-botanists have traced the widespread use of Amanita muscaria for magico-religious purposes to the forest-belts of the northern latitudes (near the Artic Circle). In the Santa Claus mythology, this coincides with his northern residence and the elves’ secret workshop.

An important feature in the Christmas tapestry is the decorated evergreen tree. Amanita muscaria is a denizen of the conifer forest, which it has a symbiotic relationship with. It was a mystery to the ancients (and early mycologists!) how the mushroom suddenly sprang from the earth-womb under the tree without apparent seed on dewy mornings. This unique mode of conception was believed to be the result of the spermal emission of God. The silver tinsel draped in festoons on modern Christmas trees is emblematic of God’s spermatozoa, which drips from above, and is scattered as celestial dew under the tree from which the sacred fungi spontaneously appears. The star or angel that crowns the Christmas tree represents the luminaries of the heavens; in particular, the radiant morning and evening star (Venus) whose fertilizing astral rays produce the seminal fluid (again, dew) that ‘miraculously’ brings about the ‘Virgin Birth’ of the fly agaric, genus Amanita. The twinkling multicolored lights that adorn Christmas trees are symbolic of the flashes of intense colors experienced by the bemushroomed shaman as part of its potent entheogenic effects.

Amanita muscaria is easily recognizable as the toadstool abode of elves and fairies in European folklore as is depicted in numerous Victorian era illustrations. Frequently accompanied by the shaman’s spirit guides, the mushroom is also discernible in cave petroglyphs and encoded in old world church frescoes. The mushroom’s notable affinity with elves also figures prominently in the Christmas tradition as Santa’s little helpers and the bustling activity at his secret North Pole workshop. In the shamanic rituals, gnomes and elf-like entities are the vivid constructs encountered during the visionary voyages of those who partake of the mushroom’s powerful hallucinogenic properties. During such heightened states of awareness; the celebrants receive the ‘unwrapped’ gift of extraordinary visions and hidden knowledge.

Among the shamans and tribes people in the Artic and boreal regions, one of the preferred methods of imbibing Amanita muscaria is to drink the urine of reindeer that browsed on the mind-altering fungi. According to some ethno-botanists, chewed mushrooms passing through the animal’s digestive system (and kidneys) both reduced negative side effects (delirium, nausea and seizures) and increased the efficacy of their entheogenic effects. The psychoactive decoction doesn’t, however, prevent the intoxicated person’s facial features from becoming noticeably flushed with a ruddy glow as they commune with the spirits.

This unpalatable method of consuming Amanita muscaria – along with the telltale side-effect – may be the source of Santa’s flying reindeer, and of one in particular, Rudolph, whose nose glowed bright red as he guided Santa through the foggy night in order to deliver his gifts. In the shaman’s spirit-journey, the “foggy night” refers to any visual distortions and neural turbulence experienced while being transported into an alternative realm of consciousness by the mushroom’s wondrous properties.

STOCKINGS HANGING FROM THE FIREPLACE MANTLE

If not consuming the reindeer potion, the shaman ingests the diced “Flesh of the Gods” after the mushrooms have been dried in a leather pouch suspended near a blazing fire. A reminder of this Siberian religio-cultural practice is the holiday custom of Christmas stockings hanging from the fireplace mantle.

SANTA COMES DOWN THE CHIMNEY

Santa’s unorthodox mode of entering one’s house by climbing down the sooty chimney is symbolic of the shaman’s spirit body’s descent into the underworld (collective unconscious) in order to access the gift of inner vision.

Although their origin is still shrouded in mystery, traditional red and white candy canes hanging from the Christmas tree bring to mind the decorated ritual staff that is an integral part of the shaman’s regalia. The staff is the physical representation of the axis where two realities join, and functions as an energy conduit or mediator between the physical and spiritual realms. Such magical wooden staffs are often adorned with talismanic carvings and topped with jingle cones or pine rattles.

The time for charity and helping the needy has its likeness to the duties and function of the tribal shaman.

The ubiquitous Christmas cannibalization of the gingerbread people confection (as well as eating the shingles from a candy cottage) hints at the ultimate shamanic secret – although it would be unwise to comment further, even should one be starving for this esoteric knowledge.

There are several varieties in the genus Amanita that might be mistaken for Amanita muscaria, some of which are poisonous and even deadly. Therefore, proper identification is crucial, especially for anyone planning on consuming them (which we DON’T suggest!). 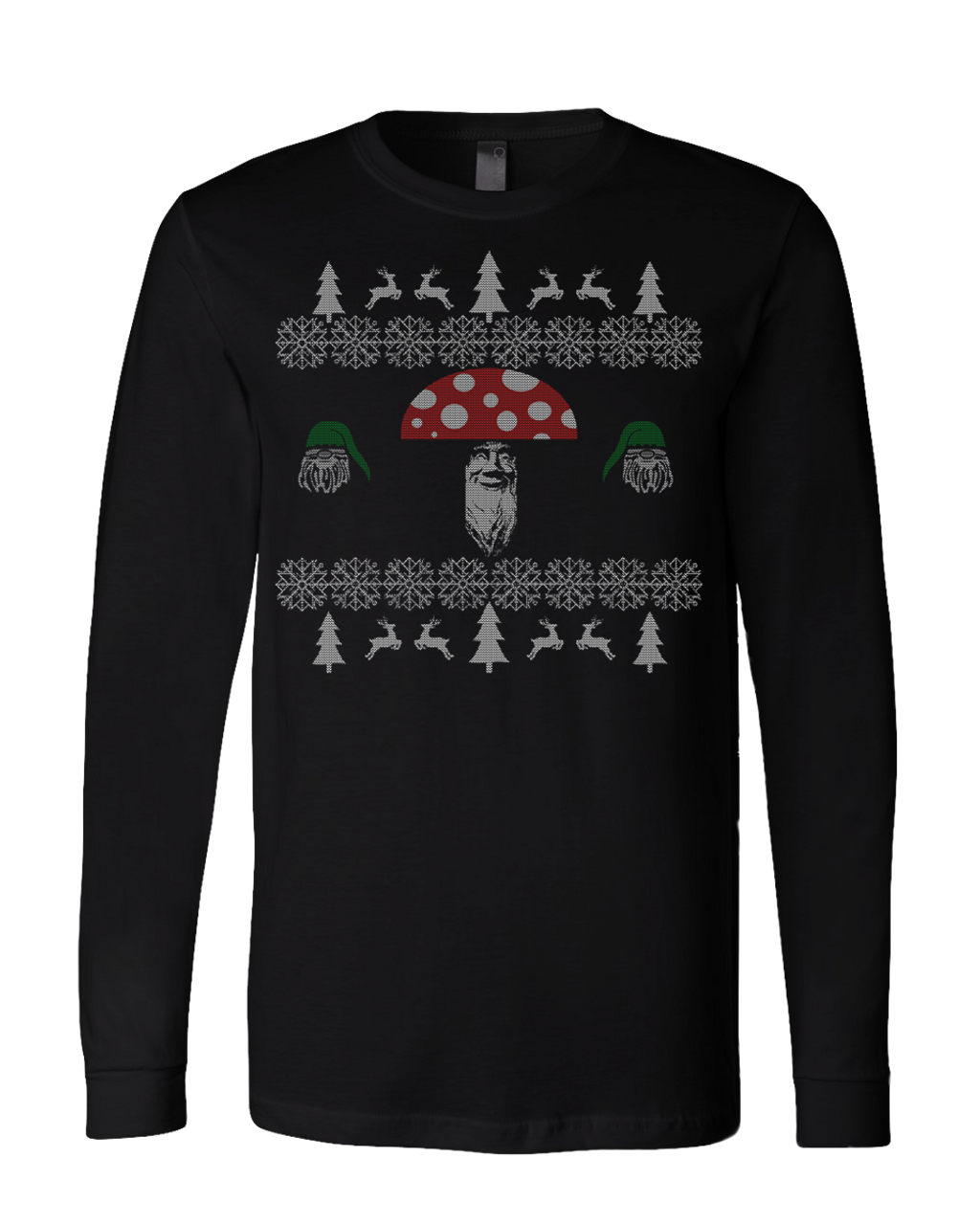