In doing some inventory at the MERCH STATION, 15 COPIES of “THE OTHERING”, a novel by yours truly (BMB), were discovered in an unmarked cardboard box. These are from the 2nd edition (limited to only 200 copies – all that exist for sale, with the first edition of 200 copies also sold out). As for the novel itself – what can I say: My mother liked it. Okay, that’s not true. At 99 years old, the family won’t let her read it – either because of the realistic left hand path tantric sex magick in the last two chapters, or because they feel she might be offended by my including her bastardized version of a Japanese dish called “yakamish.” I’m not exactly sure, but I lean towards the latter.  The novel is $19.99 or thereabouts.

Growing up in Southern Illinois in the 1960s, Addison Albright appears to be a typical mischievous teen – even though the manner in which birds flit from branch to branch in the placid suburb troubles him. Oddities in his childhood memories also cause him to wonder if things are really as they seem in “Little Egypt?” The one person who might know is the town villain, Maxx “Molewhisker” Schaufler – a former undertaker with a hot rod hearse who Addison encounters in a private cemetery with curious grave markers. Not only is the old codger’s appearance unusual, there’s something peculiar about his ramshackle Victorian that Addison soon comes to realize. As a series of perplexing events has him teetering on the brink of insanity, someone else is attracted to Molewhisker’s afflicted mirror: a scholarly biker named Zerrill who claims to be a member of an epigraphic society. After involving himself in the strange relationship between the enigmatic Schaufler and the boy struggling to free himself from his mysterious control, his true agenda is called into question. Exploiting the town folk to achieve his cryptic objective, the narrative darkens when Addsion becomes infatuated with a gorgeous college girl with esoteric interests. As the three match wits while attempting to unravel a local legend that could revise world history, their lives will be forever changed when they discover the shocking truth revealed in the Othering. 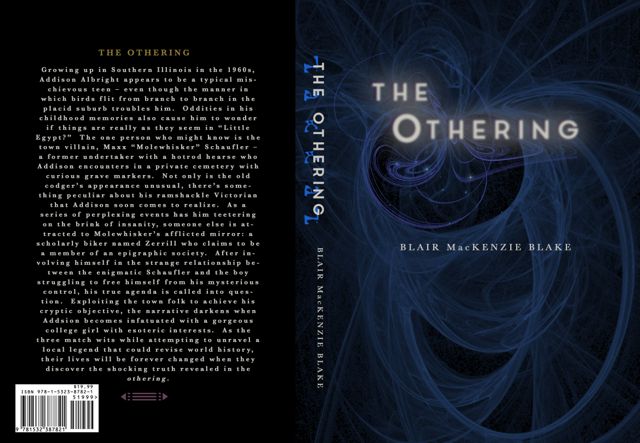